GEOGRAPHY
Nepal is located in the Himalayas and bordered to the north by China and to the south, east, and west by India. The north of the country has eight of the world's ten tallest mountains of the world. The highest is Mount Everest. Another famous mountain for its relatively short trekkings is the Mount Annapurna. The south is fertile and with much more habitants. Thus, the population density is high in the valleys and very few above 2,000 meters. Nepal has approximately 30 million people, whom about 50% live below poverty line.
The capital is Kathmandu, nowadays with a lot of traffic and quite polluted. In the metropolitan area there are 1.5 million inhabitants.
The religion practiced by a larger majority of people is Hinduism. However, there is a minority of people such as Sherpa and dholpas, who practice the Buddhism.
The main income and jobs comes from agriculture (tea, rice, corn, wheat, sugarcane, milk, and water buffalo meat). There is little industry which is related on the processing of the agricultural products. Tourism is another source of income (beautiful landscape, historical buildings, some easy trekkings and also high mountains for serious climbing). In the last decade the number of shops in Katmandu has suffered a strong increase. Even some international companies are now present in the main streets. The Thamel area of Katmandu is crowded door-to-door of hostel/hotel and souvenirs shops, who sells jewllery, cloths, religious items and many copies of antiquities. In spite of this, the rate of unemployment (and underployment) is very high (46%).
http://www.indexmundi.com/nepal/unemployment_rate.html. Therefore, many people have to emigrate, mainly to India; the Gulf countries and Malaysia.

PEOPLE OF NEPAL
The Nepalese are descendants of three major migrations from India, Tibet, and North Burma and Yunnan via Assam. There are about 90 different races and tribes.
The largest groups can be divided on the basis of geographical locations by altitude.
http://www.visitnepal.com/nepal_information/people.php.

1) Alpine Based Cultural Groups. High Himalayas
Sherpa people. It means people of the east in the Tibetan language. Originally the come from Tibet. They are Buddhist
Dolpa people. They live west of the Kali Gandaki river valley, in the high mountains. They are Buddhist.
Larke and Siar people. Larke are living in the northern most part of Nepal's Gorkha district while Siar is the northern part of the Dhading district. They speak the Tibetan and Gurung languages and have ethnic affinity with Gurungs.
Manang bas. The people of Manang are called Manang Bas. They live close to the Annapurna. They have their own language and scripts.
Lhopas. Live in the Mustang areas. They practice the Buddhism. They have their own local language and festivals.
Olangchung people. These people are the inhabitants of Olanchung Gola, the main trading route along Eastern Nepal
Other ethnic groups within Nepal's alpine region are: Thudam, Topke Gola and Lhomis.

2. Temperate Zone Based Cultural Groups. Middle Hills and Valleys
Brahmin and Chhetris. They ancestors came from India's present Kumaon, Garhwal and Kashmir regions. In Nepal are distributed in scattered patterns all over the country, which are considered the two highest castes in Nepal. They follow the Hinduism religion. They are divided into two major streams, the Purba and Umai. The Kumain people are of the origin of Kumo, Northern India, Uttar Pradesh. They speak Nepali, the national language of Nepal and use a script with basis in Sanskrit.
Kirati People. They mainly consist of Rai and Limbu people. Literally Rai or Limbu means headman. They are descendents of the Kirati's who first formed the kingdom in the Katmandu Valley. They now mainly live in far eastern Nepal. Kirati people are well known for their courage and bravery and are often recruited into armies abroad (Gurkhas). The religious text of Limbu is the Mundhum.
Newars. They mainly settled in Kathmandu Valley. They have Mongolian features and their own language and script, Newari, believed to have its origin from Tibeto-Burmans. Hinduism and Buddhism are their main religions.
Tamangs. In Tibetan language Tamang means horse traders. They originally came from Tibet. The majority of Tamangs live in the hills surrounding Kathmandu Valley. Their social practices and customs are based on Buddhism and they have their own language, Tamang.
Magars. They live in hill areas of western Nepal. Their religion is Buddhism and their language, Magar Kura, depicts their affinity to the Tibeto-Burmese tongue and culture.
Gurungs. They are mostly settled along the higher slopes of the Annapurna areas and the Kali Gandaki river above the Baglung district. They love music and have their own language. The Gurung and Magar people lives in the west, and their origins comes from North Burma, Yunnan and Tibet.
Thakalis. The origin of Thakali is Thok Khola, a high valley in central Nepal along the Muktinath region. They have Mongolian features, a fair complexion and narrow eyes. Thakalis are divided into four major groups: Gauchan, Tulachan, Sherchan and Bhattacan. Their religion is a mixture of Buddhism, Hinduism and Jhankrism.
Occupational castes. Certain ethnic groups in Nepal are categorized according to their occupation. They are Kamis (smiths), Damais (tailors), Dhibis (washerman) Sarkis (cobblers), Gaines (professional singers) and Khumbharas (porters). The origin of these castes has not been investigated yet by the anthropologists. Hinduism is their major religion and Nepali their major language. Many have their own local festivals and practices.
Furthermore, Sunwars, Jirels, Chepangs, Kusundas and Panchgaule (five villages) are other minor ethnic groups of the Nepal midland hill regoins. Sunwars are Jirels are considered to be the off shoots of Magars. Panchgaule are similar to Thakalis. Kusundas still live in primitive conditions. They live in caves, under trees and in temporary huts in the forest. Only a handful of them are settled into occupational farming. Chepangs, who are believed to be the offshoots of Kirats, are slowly moving into urban areas.

3) Subtropical Based Cultural Groups. Ethnic Groups of Terai Region and Southern Nepal border
Brahman and Rajputs. These people are similar to Bramin and Chhetris of the middle hills. Their are influence from the neighboring North Indian people.
Tharu. They live in the southern Tetai region. They follow the Hindu religion and their practices are dependent on many typical Aryan practices. Danwars, Majhis and Darais are very similar to Tharus, physically and culturally. Nevertheless, they speak their own languages which are of Sanskrit origin.
Rajbansis. This is a dominant ethnic group of far eastern Terai areas of Jhapa and Morang. Although they follow both Hindu and Muslims religions, they have their own local practices.
Satars. They are similar to Santhals of Bihar, India. They are very much like Tharus and their social life is organized and disciplined. They believe in Hinduism. Dimals, Bodos, Dhangars are agriculturist Hindu. Bodos are settled in an area know as the Mechi Zone and are more known as Mechain people. Dhangars, who live in one part of the eastern Terai have their origin in Madhya Pradesh, India. Dhimals are the Terain counterparts of the Limbus from the eastern Terai, mainly in Jhapa.
Musalmans. There are Muslims migrated from Northern India. They speak Urdu and their social practices correspond with the Muslim religion. 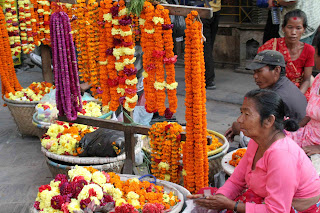 The major language is Nepali, which is the official language (48.61%). Other languages are Maithili (12.30%), Bhojpuri (7.53%), Tharu (5.86%), Tamang (5.19%), Newari/Nepal Bhasa (3.63%), Magar (3.39%), Awadhi (2.47%), Rai (2.79%), Limbu (1.47%), and Bajjika (1.05%). Dialects of Tibetan are spoken in and north of the higher Himalaya where standard literary Tibetan is widely understood by those with religious education. Many Nepalis in government and business speak English as well. Local dialects in the Terai and hills areas are unwritten, although attempts to conver in systems for writing many in Devanagari or the Roman alphabet.

The modern world has also arrived in Nepal. The canadian singer Bryan Adams played in Kathmandu in 2011, being the first international rock musician who play in Nepal. Pitifully, electric guitars, large set of drums, electric bass and hip-hop are now played by many young musicians. I could heard pop and rock music in Katmandu, with many extra-decibels to hidden the lack of virtuosity. Also there is a strong influence of the indian music. Folk nepali music is in danger due to the lack of interest for the youth and the paucity of musical schools.

Traditional Newari Music . It developed from medieval era in the Katmandu Valley. One of the dominant forms of traditional Newar music is Dapha, which are devotional songs based on classical ragas. Dapha music is played by bands known as 'Dapha Khalah' that may be associated with a traditional groups called 'guthi'. According to the ragas certain songs are played at certain season or time of day. The Newari Music orchestra consists mainly of percussion and wind instruments. String instruments are very rare. Paahan chare music is probably the fastest played music whereas the Dapa the slowest. There are certain musical instruments such as Dhimay and Bhusya which are played as instrumental only and are not accompanied with songs. The dhimay music is the loudest one. In the hills, people enjoy their own kind of music, playing sarangi, madal and flute. They also have many popular folk songs known as lok geet and lok dohari.

Other Indigenous Nepali Music
Khas music. In the Khas society traditionally, castes like Damai, used to play a number of instruments for occasions such as marriage. The minstrels, gaine, used to play instruments like Sarangi but this music and the Gaine are gradually declining.
Gurung Music. The gurung have very rich tradition of music and culture. Gurung have established the system of Rodhi which is little similar to mordern discos, where young people meet and share their views in music and dancing. They have own music and dancing history. Some musical dance like Ghatu, Chudka are still in existence.In many gurung villages they are still performing such type of musical dances. These dance are performed either in a solo or in a groups.In few gurung villages one can still find such dances or music.
Kirant Music. The Yakthungs (Limbu) have various forms of dance, songs and musical instruments. Of them, Dhaan Nach (paddy dance) and Dhol Nach (drum dance) are popular symbolics. Rais celebrate Sakela and Sakewa which are also known as Chandi Naach. Many form of their dance involve rituals or religious offerings towards Mundhum (native Kiranti religion). Traditional dance and songs are also practiced for weddings, festivals or simply gatherings.
Tamang Music. Tamang community is well known for Damphu, traditional instrument. Tamang selo music is based on the usage of Damphu and Tungna. Western and Indian instruments are also found in some modern Tamang Selo music.
Magar Music. Salai Jo and Sorathi are the two unique and exclusive musical genre of Magar music. Other folk music and instruments can be found between the sherpa and people of tibetan origen. They use to play a six-stringed named dramnyen. They can be heard in the Himalaya mountains, but sometimes also in Kathmandu in the Bodnath tibetan area.

Dohori. It is unique genre of song in Nepal and in the world. Dohoro means from two side, or a debate. This debate is in rhythm, and involves quick and witty poetry. The two teams in Dohori usually involves boys in one group girls in the other. The song is started with a question usually from the boys side. The girl follows the question with a quick response and continues the musical conversation. Dohori songs can last for long time. The length of the Dohari depends on the quick thinking ability of the players. Some Doharis have lasted as long as seven days. People celebrate the entire night singing the Dohari. They start singing in evening and end at dawn. Love and marriage are usually the topic of the debate. The male expresses his love or feelings to the girl in the song and girl may or may not respond positively for various reasons. 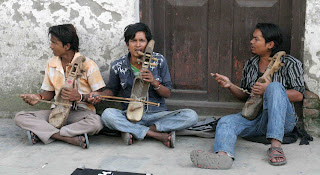