Introduction. China has 56 ethnic in addition to Han people. In the Yunnan province there are 52 ethnic groups, widely distributed in the area and representing about 33% of the total population of Yunnan.
Kumming is the capital of province. It is a large and modern city, being the door entrance of the Yunnan, and south Xishuangbanna region. 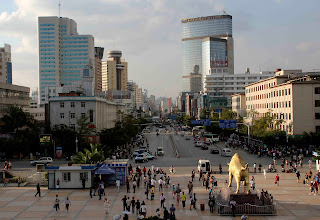 It is necessary minimum two days to explore the city and surroundings. In the center the most interesting sights are the Yuantong Temple and the Green Lake Park. 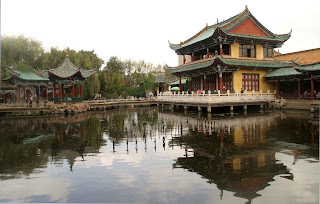 Green Lake Park
The most interesting sights are at the outskirts of the city: the Yunnan Nationalities Museum, and across the street, the Yunnan National Village. To go there get the bus nº24 or 44 from the Main Train Station, it takes about 45-60 min. If you like to hike, you can go to the Huating Temple and Xi Sahn (Western Hills), where there is a nice easy walk in a narrow path in the cliff with many Buddhas in the stones: The Dragon Gate. It is an easy path. There is a nice view of the Dian Chi Lake and Kunming. This interesting area is about 15 km from Kunming. 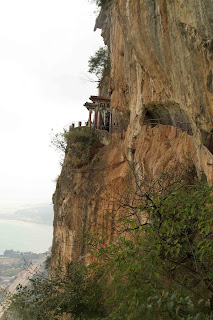 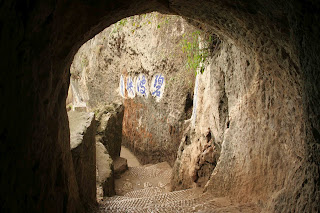 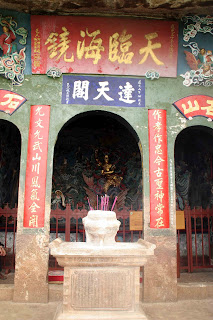 Yunnan Minorities. What it makes interesting to visit Yunnan is its multi-ethnicity. In the north of Yunnan, which borders with Tibet and Sichuan to the North and Guizhou and Guangxi to the East, is inhabited by Naxi people, including the Mosuo, Bai, Tibetan, Nakhi, Yi, Miao, Shui, and Buyei (the last three minorities also lives in Guizhou and neighborhood provinces). In the Xishuangbanna region located in the south of the Yunnan province lives about thirteen minorities such as Dai , Hani , Yi , Lahu , Bulang , Yao, Miao , Zhuang , Jingpo, Jinuo, Hui and Wa. This region borders Myanmar to the south and Laos to the south-west and also Vietnam. Some of these minorities also live in these three countries. 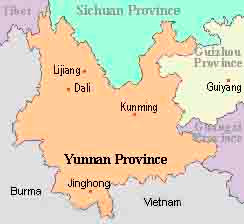 Xishangbanna region. Jinghong City. The main city of autonomous prefecture of Xishangbanna is Jinghong. It is a pleasant relatively modern city that can be visited in 1-2 days. The downtown is accessible by walking. The two main bus stations are centrally located (this is not common in modern chinese cities). One station is for long-distance destinations (eg. Kunming) and the other (Bus Station number 2 or Banna Station) is very useful to visit the nearest towns and markets of the area. There are two Banks of China, in which it is possible to change money, and one China Post, all of them in the two main streets, that paralleled runs from north to south of the city. Nowadays, a building fever is seen in the periphery of the city.
There are not a many things to do in Jinghong. Just walk along the main streets and to visit the very small lake. There is a street near to the long distance bus station which is plenty of turistic shops. In the night you can go to the Mengbala Naxi Arts Theatre which every night there is dance shows for mainly Chinese tours groups. In the south of the city, there are several pleasant restaurants (easy to find, just check the Lonely Planet). Some of these restaurants are for local people and the other two restaurants are also visited for the few tourists that can be seen in Jinghong. In one of these restaurants, they organized short trekkings in the area for those people that are short in time.
I used Jinghong as the base to visit the early morning markets of the small villages of the region and to trek the surroundings. The best market, although it is small, but very colorful and with many minorities and hill tribes is held in Xiding on Thursday. It is not necessary to go the night before to see the early morning market, as it is said in the Lonely Planet guide. It is a tiny town with nothing to do. With public transport, there is only one bus from Jinghong to Xiding. When it arrives to Xiding about 11:00-11:30 am, it leaves from Xiding about one hour later. The best way to go using public transport, it is getting the regular mini vans that goes via Menghai or Menghun and then to Xiding. Ask twice the destination to the driver if you want not to be stuck in some small town for 1-2 hours. And get up early. I took two vans to reach Xiding (and 3 hours!). To come back to Jinghong there is only one bus that leaves at 12:30 pm from Xiding. But it can leave earlier if it has already filled!. If you travel with a group, I advise you to rent a van with a driver. 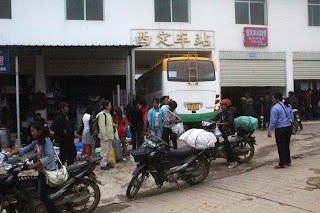 The tiny Bus Station in Xiding 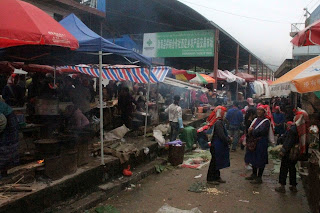 
Other markets, although less interesting, are the Sunday Market in Menghun and the daily market in Menghai. To go this destination, there are frequent buses from Bus Station Nº 2. The ride takes 90 and 45 min, respectively. From this station there are frequent buses to travel to the Dai area in Menghan.
How to reach Jinghong?. From Kunming by plain (1 h) and by train (9 hours) or by bus.

HANI PEOPLE
I went from Kunming to Jinxie to see the famous Yuang-Yuang Rice Terraces, where the Hani and Yi people are still seen in traditional dresses. To go there I caught the bus nº 154 near to the crowded train station in Kunming (in the south of the city). It takes one hour to get the South Bus Station. In Kunming there are five large bus stations in the periphery of the city. There I bought a bus ticket direct to Xinjie, passing by Jianshui city without leaving the bus (6-7 hours).
Xinjie is a tiny town, where lives many Han people, but it is the home of Hani and Yi minorities. There are many basic hotels near to the bus station and one large high-standard hotel if you have a good budget. The most interesting of the town is to visit the Yuang-Yuang Rices Terraces and some Hani and Yi villages. 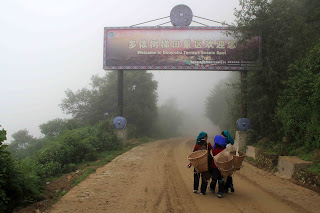 Entrance to the Duoyishu Terraces


In contrast of other minority villages that I visited, do not expect in these villages the hands open. They are not especially kind with the foreigners. Pitifully, I could not get much information about the music of the Hani people.
From Xinjie to Jianghong, I went south via Jiangcheng. The bus departure frin Xinjie is at 1:30 pm and arrived in Jianghong at 4:30 pm. In the bus station there is a Hotel, in which the personal are waiting the passengers, and the next day, early in the morning the bus leave to Jianghong. The road, between mountains it is quite nice. But it is a long trip in narrow roads, many bends, and bad pavement and with a crowded old bus. If you visit Xinjie, I will advise to come back to Jianshui or Kunming and then to Jianghong, by train. It is safer.

Hani people. In China, the Hani population numbers approximately 130,000 people. They mainly live in central and south of Yunnan (Xishangbanna region) in mountainous regions. They live also in north of Vietnam. They have their own language, which belongs to the Yi language branch of the Tibetan-Burmese group of the Sino-Tibetan language family. They speak three dialects. Since they don’t have written language they used Han characters. They mainly farm and grow rice. They are famous for the Pu’er Tea in Xishuangbanna, houses are built of bamboo and the roof is covered with straw and wood, resembling a mushroom. 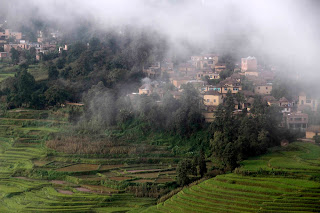 Hani Village. In the center a "mushroom" house

The ground floor accommodates the livestock and in the second floor lives the family. Around Xinjie I could see many new built houses, relatively small, all of them made of a simple structure of cement that gave the feeling of unfinished. The clothes of Hani people usually are black, mixed with the blue. Old women wear jackets and decorated with silver ornaments. They wear black turbans. Although, these clothes are different in other areas. 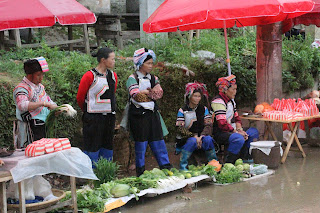 Market near to the Duoyishu Terraces

In the afternoon, at the main square of the town it is possible to see Hani and Yi people still wearing their traditional dresses while there are waiting the sunset. 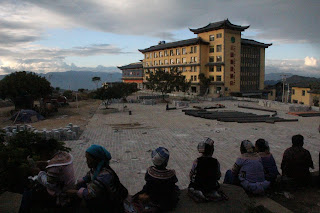 The famous Yuan yang Rice Terraces are about 25 km from Xinjie. The rice terraces are very picturesque in winter, when the terraces are flooded with water. In August, the terraces are dry and there use to be fog early in the morning. So don’t get up early to see the sunset. I found a Thai tourist who spend one week to try to shot some pictures of the terraces without fog. To go to the terraces by public transport it is difficult due to there are very few buses. The best way is to rent a taxi. It is not expensive. An entrance fee in the road has to be paid. Explain to the driver by drawing the route to have the things clear. There is no driver who speaks English. Another possibility is just to go to the bust station, and soon or later a girl who speaks English will meet you. If you wish it, she will hire the taxi for you (she gets a commission of about 50 Yuan). If you go in summer, in order to try to skip the fog, it is better to visit the terraces later than 10-11 am or even in the afternoon. 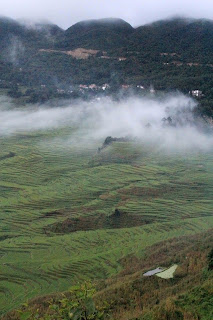 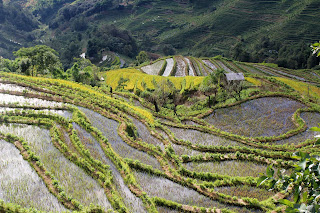 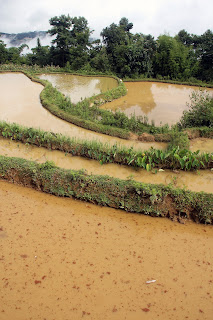 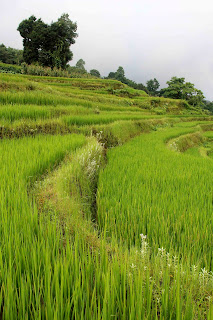 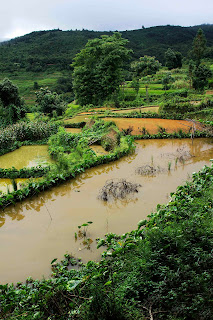 Hani Festivals. The Hani main festivals are related to the rice seasons: The Rice Husking New Year, the Mid-Rainy Season (Kuzhazha) and the New Rice Festival. The former is the most import. They cook large round rice balls and cakes. The Festival last five days. On the first day of the festival, the village holds a big banquet in the center of the main street with a row of tables along the main street. In the Kuzhazha festival an ox is sacrifice, and people join in the Main Street or square for wrestling, singing and dancing. It is a good moment to find a couple; although, some marriages are still arranged by the parents. Once the couple is married, they usually build a room close to their parents. As the Yi people, the Hani enjoy the music and dancing. Thus, young people use to sing to her lover using a small three-string lute (mandarin name: sanxien). Love songs are named Azi, and it can be sung solo or in chorus, but not at the presence of the relatives of the opposite gender. Old people at the table sing Haba songs, which are very popular and known for all the generations. Hand Clapping, Bamboo-Tube and Fan dances are popular. The 'Dongpocuo' is danced in Xishuangbanna. Hani people play bamboo flutes (ebi?), drums, three-string lutes (sanxien), and wind instruments.
Below are shown some instruments of the Hani exposed in the interesting Yunnan Nationalities Museum, in Kunming. 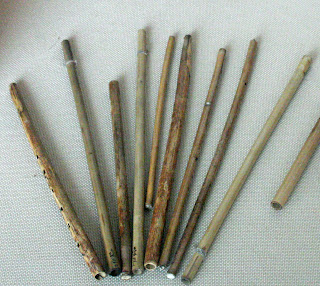 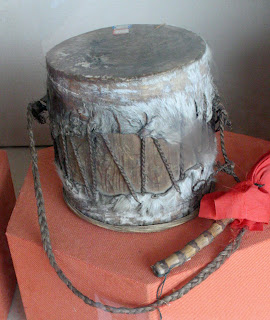 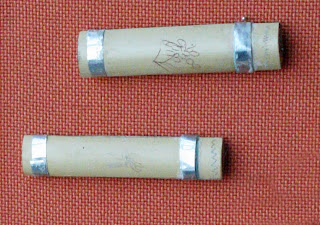 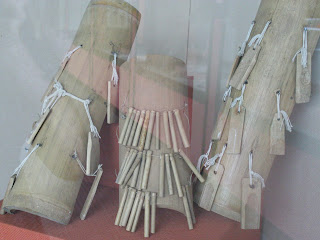 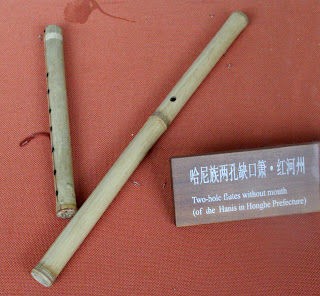 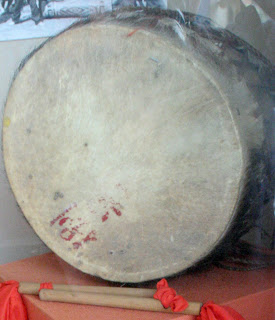