The typical folk instrument of Buthan is a long lute named Dranmryen. Other folk instruments are the piwang (two bowed string "fiddle"), Yang-chen (dulcimer), lim (flute) and kongtha (jew's harp), but they are also played in other asian countries. 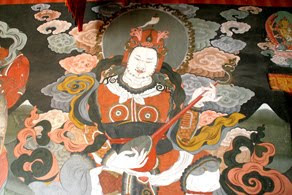 The most common Bhutanese instrument are listed below. The tibetan name equivalent is given in some of the religious buddhist instruments.

CORDOPHONS
Piwang. Two strings bowed instrument. It has a rounded-cylindric resonance box with a skin as a resonance membrane. It reminds the xinese erhu.

Danmryen (Dranyen). It is a long frestless lute with seven strings. One of the strings comes from the middle of the neck. The strings are commonly made of gut. It is usully beatifully painted with green, blue and red colours, usually with religious motifs. On the top of the neck there is almost always a dragon figure. There is one bridge that is over the skin in the resonance box. The body of the dranyen is usully made of one pice of wood (except the top with a head of a dragon) and the resonance box is carved to make a cavity where the skin is placed. The size is between 60 and 110 cm, depending of the maker. In the villages it is possible to see dranyen home-made, quite simple and without decorations. Similar instruments of the dranyem are found in the Himalayas (Nepal, Tibet, Sikkim, west Bengala), but they don't have the characteristics of the Bhutanese one. They are smaller than the bhutanese type and they usually have 5-6 strings. Quite similar in shape is the Dranyen played in Tibet. However, it is commonly less decorated and it has 3 pairs of strings (total 6 strings). The size and the sound is quite similar. A monk told me that a small dranyen is played in east Bhutan, in the Trashigang distring (Merak Village). 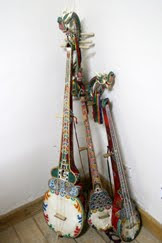 Yang-chen. It is a hammered dulcimer. It is not an indigenous bhutanese instrument. It is very similar that others played in Xina, Mongolia or Tibet. There are different sizes. It is usully painted in green, red or/and blue colors. (Tibetan: Gyumang). 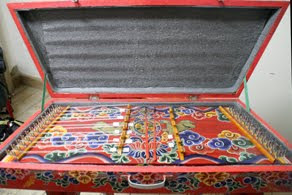 Dharu. Double membrane small drum played by monks. Also it is played in festival as a folk instrument in the dances. The equivalen name in Tibet, India and Nepal is dambaru.

Tangti. Small Dambaru. It is usually played by Gampo Monk.

Kanling. Small copper trumpet. No side holes for the fingers and no reed. Sound is made blowing and tappering the cone of the trumpet with one hand. (Tibetan: Gang-Lin / Rkang-gling)

Kanling. Copper shawm played in pairs. The size is a about 40-50 cm. It has hole fingers that allows to play a melody. It has a reed in the tip. The same name as the previous one name was given to me (Tibetan: Rgya-Gling)

Dung-Chen. Long trumpet. Played in pairs. It is a telescop trumpet made of copper. They are collapsible to facilitate the transport. In Lhasa are sold as souvenirs. In temples and festivals (Tibetan: Zang-Dung / Dung-Chen).

Tingsha. One cymbal attached to a small stick. It is played by Gompo monks

Deap: Hand bell. It is used by monks together with the dorji. Both are named Manchi. (Tibetan: Dril-bu and Rdo-rje).

Kongtha. Bamboo jew's harp. Very few people played, only children and some people in the villages. There is one tuned in a low pitch or female and another one in high pitch or male.

Arka. A row of jingle bell attached to a ribbon or a belt. It is wear in festivals by the dancers.

In the following pictures there are some examples of musical instruments played by musicians and monks in the Festivals of Tsechu and Thangi, in Timphu and Bumthang, respectively 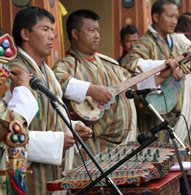 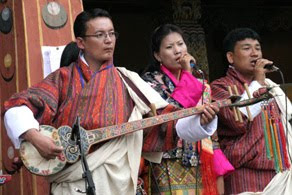 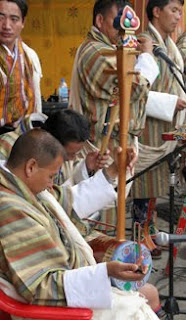 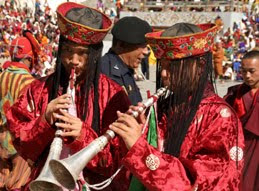 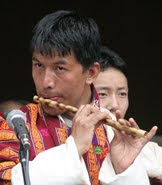 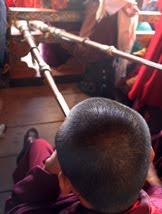 Monks dressed as atzaras playing a shorter version of Dung-Chen 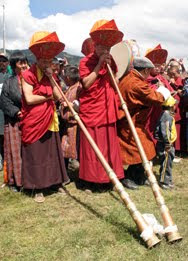 Dung-Chen. It is played in pairs 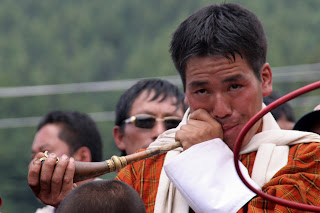 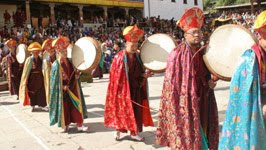 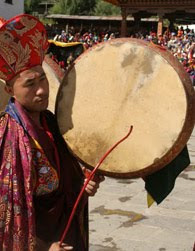 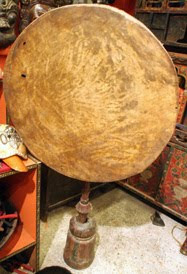 Nag placed in a stand 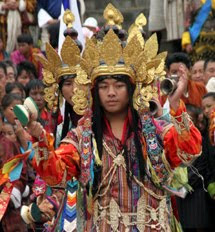 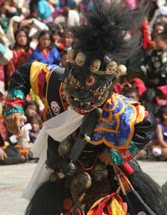 Dancer wearing a belt of large rounded bells or arka 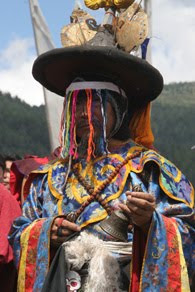 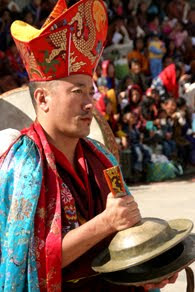 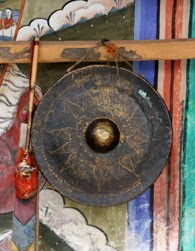 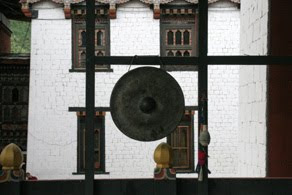 Suspended Khar-nga in a temple or Dzong 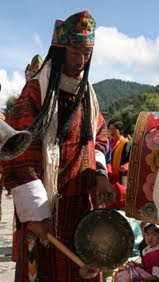 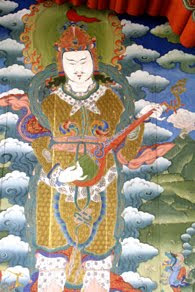 Painting of a God playing the dramnyen in Kurge Lhakhang, Bumthang 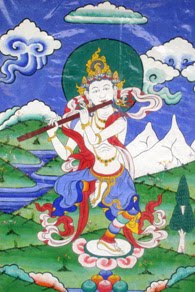 Painting of a God playing the lim in the Tromsa Dzong

All three books are out-of print

A monk and the author of the blog talking about the religious music in Bumthang, Bhutan

Aknowledgment: To the owner of the Phuenzi Guest House, Mr Tobga Tshering who helped me to find one of the few makers of kongtha, Mr Ap Dolay . By the way, from the guest house you will see a panoramic view of the Trongsa Dzong and the valley and one you can try of the most tastful meals in Bhutan.