Nowadays, if you want to have an idea of the musical instruments of Nepal, you can visit the Music Museum of Nepal. This Museum is not in any guide book. Do not try to find the address in Lonely Planet or even to ask to a Nepali tour operator. They don’t know it. If you ask to a taxi driver or a tuk-tuk they have no idea where it is located. If you plan to go, check his web http://www.musicmuseumnepal.org/ 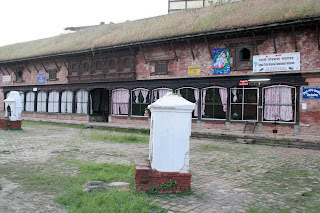 From Durbarg Square (the main square of Kathmandu), just go south following the main street, and about 24-30 min on foot, you will find a wide street. Then, turn right and it is located in a narrow street in the south side of the street (at Mahadev Bahal, Tripureshwor). It is close to Shiva temple (this is what it says in his web, but most of the people doesn’t know the temple).
If you stay in Kathmandu you won’t loose more than one hour to go and visit the museum. So, do not miss it if you like the traditional music. If you can go on Saturday morning, you will enjoy some of the concerts organized by the museum with small groups or local musicians.
This Museum was created by Mr. Ram Prasad Kadel with the help of the Government, who in 1995 started to make his own collection of Nepali folk musical instruments in an attempt to preserve the instruments and music of Nepal. During all these years, he has collected about 350 musical instruments from Nepal (and some others countries, mainly from India). In the Museum, although small, there is rotational exhibition of about 150 musical instruments. Check the video of this link to get a good idea of the museum. http://suprememastertv.com/es/ajar/?wr_id=309&page=7&url=link2_0&eps_no=1055&show=ajt&flag=0. 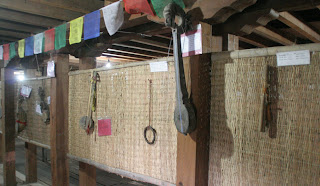 MUSICAL INSTRUMENTS OF NEPAL
To the short list of publication in Nepali Folk Instruments, now it has been added the wonderful book entitled MUSICAL INSTRUMENTS OF NEPAL written by Mr. Ram Prasad Kadel. He has made the enormous task to compile more than 350 instruments of Nepal in one book with drawings and explanations. There is a version in Nepali and another one in English. Only 100 books have been edited. If you are interested you can buy directly to him. But, please pay in advance!. The book also explains the ethnic people who play the instrument or in which circumstance is used. If you visit the museum Mr. Ram Prasad Kadel is very kind and will explain you about the musical instruments of the exhibition. 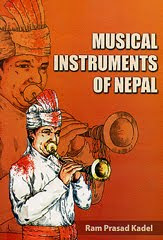 Jacket of the English version of the Book

He also published a short edition of the book of nepali musical instruments, which is distributed in the Nepali schools in order to keep the tradition of music and musical instruments
Mr. Ram Prasad Kadel is now working in a PICTURAL ATLAS OF MUSICAL INSTRUMENTS OF NEPAL. He has been taken pictures of many buildings, statues, paintings through Nepal. In a mid-term it will be published. He also is writing an anthropological book explaining the diversity of ethnies of Nepal.

Saturday Concerts in the Museum

Every Saturday the Music Museum Nepal organizes a Folk Music Concert. The event is live telecasted from Radio Mirmire FM 89.4 from 1 pm to 2 pm. If you stay in Kathmandu on Saturday, it is possible to attend the event, which is held at the Museum Nepal on the second floor. Check it before to go there. Some of these concerts have been edited in CD that can be bought in the museum (also by mail). He has published seven CDs with a simple black & white jacket but with great music. A a set of 10 postcards of drawings of Nepali Folk Musical instruments can be also bought in the Museum. 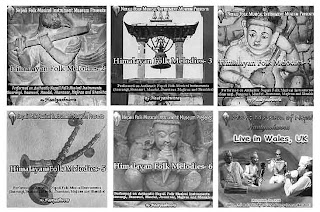 Jackets of the 6 CD's recorded on the Saturday Concerts. The First CD is included in the book Musical Instruments of Nepal 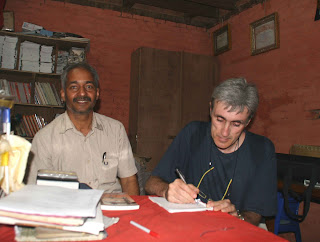 Mr. Ram Prasad Kadel and the author of the Blog

SUMMARIZED CLASIFICATION OF THE MOST COMMON
MUSICAL INSTRUMENTS OF NEPAL
There is a large quantity of folk musical instruments in Nepal, about 200 (some authors even says 400). However, sometimes are quite similar, but with different names or shapes, depending of the ethnic group who is playing it. Nepali Musical instruments are usually used for dancing, in ceremonies and festivals. The traditional indian classical musical instruments, such as sarod, sitar, tambura and tabla are not mentioned. Below the most important folk musical instruments played in Nepal according to the classification of Sachs- Hornbostel system are listed:
http://www.asiarecipe.com/nepmusic.html

1. Membranophones
-Dhimay. It double membrane drum made from a cylindrical hollowed tree trunk with leather pads at both ends. The size is about 20" in length and 16" in diameter. It can also be made of brass. The membranes are played with the hands or using a stick with a pigtail shape in the distal extreme. There is two sizes:: bigger Ma Dhimay and smaller Dhahcha Dhimay or Yalaypoh Dhimay. It is the most common musical instrument amongst the Newars. It resembles the Chyabrung of Kirat Rais and Dhola of Tharus. The dhimay is played in almost all ceremonial marches by the Jyapus.
-Damaru or KantanDabDab. Small double membrane drum used by monks and in Mohani Festival.
-Dhah. It is similar of the dhimay,
-Dholak. It is a double membrane drum, which resembles the Dhah in structure and its playing techniques are similar to that of Paschima. It is played in Dhalcha Bhajans and also accompanies Bansuri. It is usually painted in green, yellow, and red colors. It has ropes with rings to tune the membranes.
-Paschima or Mridanga. It is a double headed drum with is possible to tune. It usually is accompanied with Baboocha (thinner cymbals), Tah (thicker cymbal), Muhali (shwam) or Bansuri (flute).
- NayaKhin. It is mainly played in ritual by the Khadgis. It is also played in funeral processions it is also known as 'Seeh Bajan' (funeral drum). It is similar to Dhah but it is smaller. It is constructed from hollowed tree trunk of an average size of 14" length and 7" diameter.
NayaKhin may be accompanied with Chhusyah and Kaha (Seeh bajan) or by Tah is also and Muhali (Gunla bajan)
-Nagara. This a kettle drum played with two sticks. It is also known by the purans as Dundubhi, Dundhu, Dundhub, Bheri and Adamber. It is often played in pair, known as Joh Nagara. Nagara is also played in Panchai Baja as Damaha. It is too played in Mahakali Dance. It is accompanied with Chhusyah and Muhali.
-Daha. It is tambourine played in Bansuri Bajan or Khin Bajan. It is also used whilst singing songs and in Bhajans.
-Madal or Magah Khin. Two membrane drum with tuning paste at both ends. It is played mainly by magar people and in Newar folk music.
-Dhyangroy. It is a wooden frame drum with goatskin drumheads. It has a carved wooden handle with sea dragon head. It is employed by faith healers and shaman to invoke the spirits of the heavens. It is stroken by a curved cane beater.

2. Idiophones
-Bhusyah. It is a pair of cymbals. They are usually placed in devotional songs (Bhajans).
-Tah. It is also a pair of cymbals, thinner and smaller than the Bhusyah. It is made of Asta Dhatu (an alloy of eight holy metals). It accompanies Dhah, Dapha Khin, Paschima, Koncha Khin, Naya Khin (when played as Gunla Bajab) and others
-Baboocha. It is thinner than Tah, however, it is bigger in size. It is also made of Asta Dhatu. It accompanies Dapha Khin, Pachima, Koncha Khin, Dholak and others.
-Chhusyah or Sichhya. Chhusyah resembles Baboocha but is bigger in size. It accompanies Naya Khin, Nagara and others.
-TainNain. It is a gong, which I splayed a stick. It accompanies Dhimay.
-TiniMuni. It is made of a steel rod bent in the shape of a triangle. It is played by striking with another steel rod. It is played in Dhalcha Bhajans.
-Gan. It is bell played in ceremonies ( eg. Shradh, Janko, Ihi)
-Ghunguru. Ankle Bells
-Binayo. Jew’s harp made of bamboo or wood. Used by Kiranti people.
-Murchunga. Jew harp made of iron and it produces the sound like Binayo and it is played by Kiranti people.

3. Chordophones
-Tungana. It is a folk guitar. Very common, especially in northeastern of Nepal. The body it is carved from single piece of wood. The box resonance has a goatskin. The strings are played with an attached plectrum.
-Sarangi. The folk sarangi has four strings. The classical one it has also sympathetic about 12 strings with pegs on the right side of the neck.
-Ektare. It is a lute with only one string and a round resonance box.
-Piwang/Piwancha. It as a fiddle with two or three stringed instrument. It is played with an arrow and the resonance box is rounded. It is especially played by jyapu (Newar farmer). It has been extincted. A similar instrument it is played by the people who lives in the Tibetan border.

4. Aerophones
-Nekoo. It is a horn instrument.
-Ponga. A brass Long wind instrument
-Sankha. It’s a shell. It is used by monks
-Muhali. It is a conical bore shawm, which is played by Jugi caste
-Bansuri. Bamboo transverse flute. There are different pitch and kinds. The most common are Ghor, Majhawala and Teep, producing low, middle and high tones
-Phaamuka. Three bamboo pipes f the Limbu ethnic group. 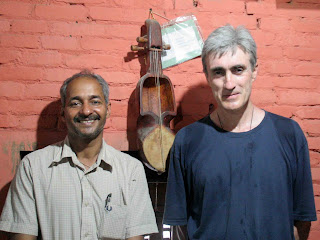 Mr. Ram Prasad Kadel and the author of the Blog


Below are shown some examples nepali folk musical instruments owned by the author of the blog. 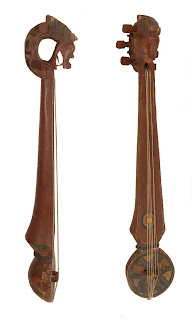 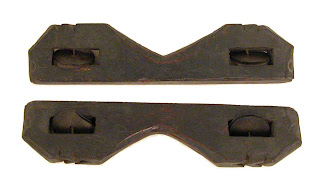 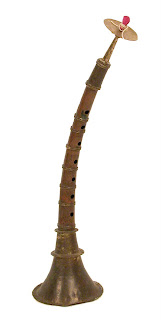 I consider this the finest blog I have read all this hour.
pro audio

Fascinating information I haven’t been experienced such information in quite a long time.
online payday loan