HOKKAIDO. The Revival of Ainu Music

Hokkaido is the large island in the north of Japan. It is connected with the main land by a train under the sea. The Ainu is the indigenous people of Japan that live in Hokkaido. They used to live in the Sakhalin islands north of Japan, the northern part of Honshu on the main island and the Kamchatka Peninsula and on the Kurile Islands of Russia. 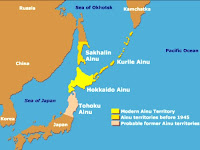 It is not clear which are the origins of Ainu people. There are many theories surrounding the origins of the Ainu, but the most popular is that the Ainu were descended from the Jomon people, a hunter-gatherer society who lived throughout Japan about 13000 years ago. They probably came from Siberia or from the southern Pacific. A Caucasian and mongoloid origin as also been proposed.
Ainu people were colonized by the Japanese until Meiji-era. The Ainu attempted several unsuccessfully revolts during the Edo period. Finally, they were forced to an assimilation process, being ordered to adapt to Japanese dresses, ethics and agriculture as well as they married with Japanese people. In addition, their lands were confiscated. The assimilation policies were so successful that nowadays almost nothing remains of the Ainu’s traditional way of life. The most of their traditional dresses, tools, and musical instruments are now only seen in museums.

There is not a national census of Ainu people that lives in Japan. The estimated number that identified themselves as Ainu is about 24,000, although probably there are more. Due to the intermarriage between Japanese and Ainu people, the number of pure blood type Ainu people is very small. Pure blood Ainu have physical characters that are quite different of the Japanese people. They have a larger eyebrows and nose than Japanese people. In addition, they have more body hair. In former times they used to wear a large beard and long hair.

In relation to the language, there are several theories of the origen of Ainu language: a Siberian (Altaic), southern Pacific, Caucasian and a mongoloid origin as been proposed. In addition, existed several dialects but with no system of writing. However, Ainu language has been transcribed to katakana and Russian cylliric. Nowadays, there are very few people (about 100), usually old people, that speaks their native language. In fact, it is endangered language, that it could extinct in the next generation. The Japanese recognize the Ainu as an ethnic minority in the 90’ decade. However, they still don’t have full indigenous rights and political representation. For more information about the Ainu people check the following webs:

AINU MUSIC
Early Ainu music was associated with festival singing and dancing, and was related with spirit deities (kamui) and animals such as the bear, whale, owl and the sea turtle. The playing of the musical instruments was used in the context of telling epics stories, praying, greetings, magic spells or just for enjoying themselves. Many songs are accompanied by hand-clapping alone, or the singers form a circle or perform a pantomimic dance (e.g. bird dance).
They may use a characteristic form of throat singing called “rekuhkara”: it is like a game that involves two women facing each other, with one forming a tube with her hands and chanting into the mouth of the her partner. The technique is essentially one where the "giver" provides the voice and the "receiver", holding her glottis closed, uses her vocal tract to modulate the sound stream http://en.wikipedia.org/wiki/Rekuhkara
The main styles of Ainu music or chants are epic and narrative songs called yukar and the upopo.
The yukar is a narrative style of sacred songs generally performed by women which use shorter repeated melodies. It may be also heroic epics, being long stories but usually performed by men. The rhythm is kept by clapping the hands or by beating a stick against a wooden hearth that it was used to be found in the traditional Ainu houses.
The upopo (seated songs) is a vocalized form of contrapuntal or polyphonic music based on chanting. Many woman are seated in a circle. Placed in the center is wooden chest lid, which the women beat with their hands. They are performed without instruments. When they use musical instruments, such as mukkuri and tonkori (see below), they are related to the daily work, for creating a work rhythm or imitating animal’s calls or raindrops patterns, but also may acted as prayers and warded off evil spirits which may cause diseases (kutunke). Many Ainu tradicional dances are based on rimse (round dance) centering around upopo chants.
They also may sing lullabies (named ihunke and iyonnonkka) using falsetto and rolling the tongue in the mouth.
The sinotcha are lyrical songs, usually sung bu one person, which express ordinary everyday emotions, such as love and happiness. 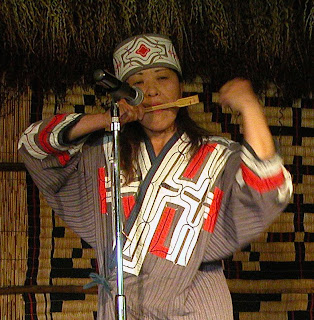 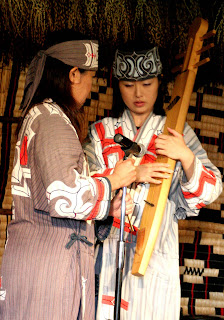 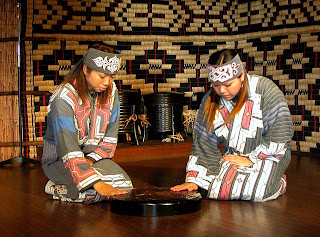 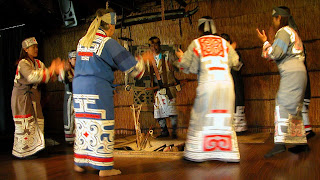 The pictures of the singers, musicians and dancers were taken from a performance in The Ainu Museum in Shiraoi, Hokkaido. For the description of the instruments see the Page of Ainu Musical Instruments in this blog

In my visit to Hokkaido I noticed a strong revival of the Ainu culture http://www.japanfocus.org/-Chisato__Kitty_-Dubreuil/2589. I have to thanks to the staff of the tourist office in Yamagata, in the building Central Kajo http://www.yamagatakanko.com/english/index.html, who helped me to plan my travel to Hokkaido. There are so many places to visit in Hokkaido related with the Ainu Culture that is quite difficult to choose. In addition, some of them are a little far for foreign people who are short in time (I'm a catalan from Barcelona, Spain). The woman who kindly attended me, suggested to visit The Ainu Museum in Shiraoi, Hokkaido. To go there, take the train from Hakodate, Hokkaido to Nobosiberetsu (Sapporo Line), and then change train to Shiraoi. It is possible to visit in one day trip from Hakodate.

The Ainu Museum in Shiraoi, Hokkaido, it was established in 1976 by the Shiraoi Fundation for Preservation of the Ainu Culture, It is a very interesting because there are a museum and several houses that simulate a traditional Ainu village or kotan. It is placed near the lake Poroto. The museum is also named Porotokotan (Poroto village). It is the largest construction of an Ainu village in Japan. They have about 800 items on display. Also you can see a performance of Ainu traditional musical and dances. Also it is possible to learn to play the mukkuri. They also have a quite complete shop of books and CDs related with Ainu culture. Do not miss the beatiful sunset view from the village towars the lake http://www.ainu-museum.or.jp/. 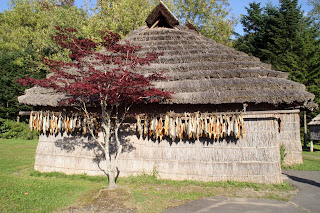 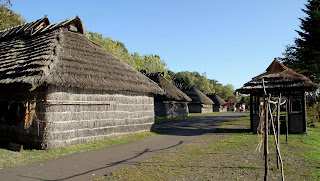 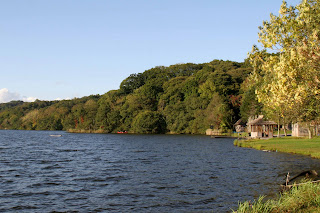 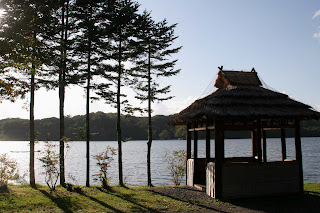 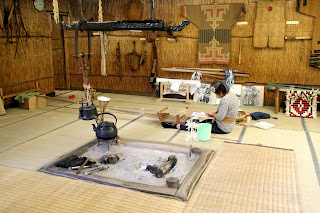 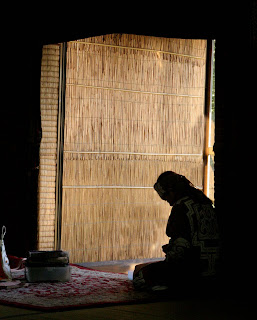 Altough small, it is very interesting the Hakodate City Museum of Northern People in Hakodate (south of Hokkaido). They do not have shop of books for sell. The have a nice DVD of the Ainu on display.
If you can not go to Hokkaido, in the Ueno Park in Tokyo you can visit the Tokyo National Museum http://www.tnm.jp/ They have a display of about 40 Ainu items. If you visit the touristy city of Kyoto, you can go to Osaka in a round day trip and visit the Osaka National Museum of Ethnology. They exhibits about 500 items http://www.minpaku.ac.jp/english/ . Thought the year is possible to attend to ceremonies, rituals and festivals organized by The Ainu Association of Hokkaido, The Ainu Museum (Shiraoi), The Foundation for Research and Promotion of Ainu Culture (Hakodate, Sapporo), and many other cultural associations.

RECOMMENDED CD COMPILATIONS OF AINU SONGS
"Songs of the Ainu". Published in the JVC World Sound Series in 2000 the CD. It included upopo and yukar songs as well as dances and lullabies. The singers are Shigeru Kayano and The Biratoi Ainu Culture Succession and Practice Group. 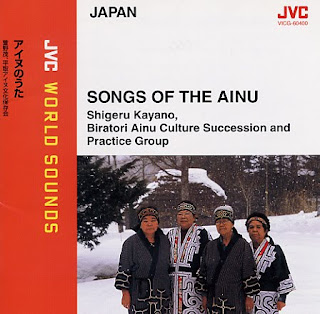 "Yukar, The Ainu Epic Songs". The Excellent Japanese World Music Library (WML) Series published this CD in 1997. It included two long yukar songs: one song is named "A duel with my Guardian God" and the other "Goldend Clogs". It was recorded in Nibutani, Japan. There is extensive english notes Now it's difficult to find. Some of WML albums now are beeing re-edited in Japan with different jackets and sometimes with bonus tracks. As far as I now this CD has not yet been re-edited. 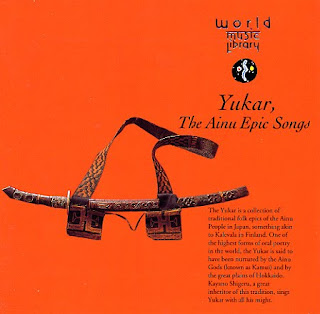 "Chants des Ainou" (Ainu Songs). It is from the Unesco Collection published in 1980 by Auvidis, 1980 France. There are upopo, short yukar songs, some lullabies and dances (rimse), a sinotcha song and other type of ainu songs (one shaman song). The songs were recorded by Kazuyuki Tanimoto and Jean-Jacques Nattiez in 1978 in the villages of Nibutani, Okaribe, Kushiro and Shisunai. This CD is unavailable. Some years ago Rounder Records (Cambridge, USA) re-edited some CDs of the Unesco Collection with completely different jackets. However, they did not released this one. 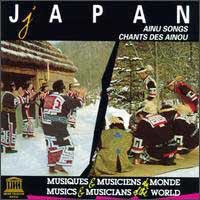 This last CD I bought it in the Shop of the The Ainu Museum in Shiraoi, Hokkaido. There is no english transcription. There are 31 tracks. Most of them are oral explanations in Japanese. In was published in 2008 by The Japan Traditional Cultures Foundation. 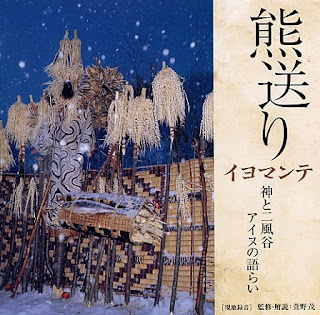 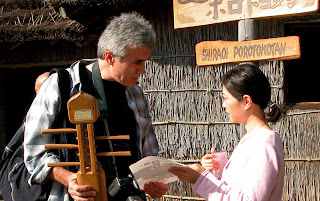 The author with the Manager of the The Ainu Museum in Shiraoi, Hokkaido.

I am very grateful to Nomoto-San and Mizue-San for their help and kindness during my visit to the Ainu Museum in Shiraoi, Hokkaido

A fascinating and incredibly informative article, thank you! I had never heard of the style of singing with the hands in a tube shape.

I would love to know more about ethnicity.. It is a sensitive subject but by looking at the faces of members of the Ainu community in all those old photographs have you noticed that there are so many ethnic heritages there?

Even 100+ years ago, it would appear that some among the Ainu look a little bit Aboriginal, some look a bit like Native Americans, some look Caucasian?

Of course, we are all related to one another somewhere down the line and we are all a unique blend of many races.